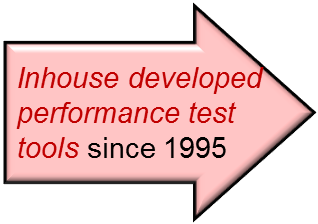 Standards for improved quality assurance must be supported by performance test tools.

Our first test tools were developed for a trading system at Stockholm Stock Exchange (today OMX) in 1995.

The tools enabled development with no manual testing, i.e. an early case of test automation. In the next version the test tools included daily check out at 20:00 (8 PM) and automated execution of all function test cases during the night. We believe this was in practice among the first cases of "Continuous delivery".

MBC, our advanced performance test tool was first introduced in 2003. From 2004 it was developed in close cooperation with our customers in the telecom market.

It has of course undergone a number of changes to meet requirements from very demanding applications during the the 18 years since introduction, but the fundamental design has never been changed. This is because MBC is architected as a system of processes communicating via internal protocols and is therefore a very modern test tool with outstanding features. The design enables, for instance, almost limitless scalability.

An early example of IMS performance testing for Service Operators can be downloaded here: MBC on IBM BladeCenter systems

Some outstanding features for demanding measurements with MBC.

The two graphs on the left side show how MBC can generate series of extreme load peaks that will expose a system to really tough conditions. With MBC it is possible to change the load from x to y transactions per second between two consecutive transaction, where x and y can be any transaction rate per second! Load changes can't be more extreme!

The two graphs on the right side show how MBC finds the system capacity of a service or a mix of services at 80% CPU load in 10 minutes with a precision of +/- 1%, a precision that is almost impossible to achieve by manual adjustments of generated load and certainly not in 10 minutes. We call this Adaptive Load Control and it also saves the need for manpower.

Read more about these and other excellent test tool solutions with MBC.

Is our market leading performance test tools of interest in your product or project?

If so, contact us for more information or a discussion.